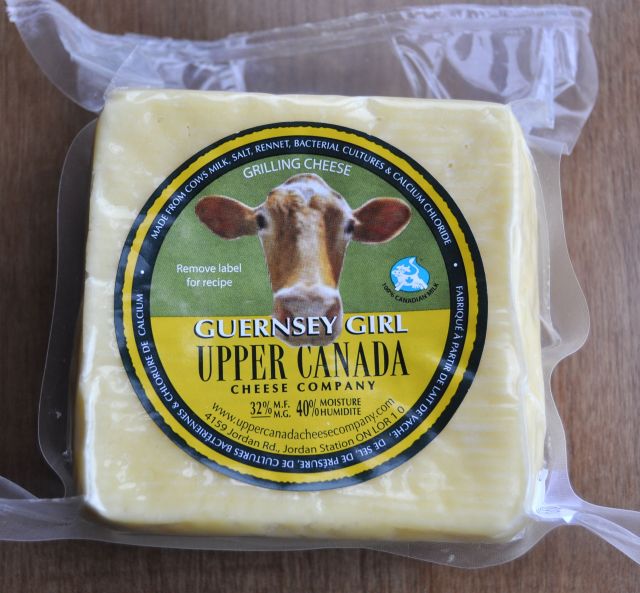 I purchased Guernsey Girl grilling cheese during a recent stop at the Upper Canada Cheese Company store in Jordon Station, Ontario, Canada. One of the staff had inquired as to whether I had tried a grilled cheese before. I responded “Of course, I love a grilled cheese sandwich with the warm cheese oozing out from between the crunchy bread.” She politely corrected me. “No bread involved”. I cocked my head in confusion and prodded her to go on.

She said that Guernsey Girl cheese is designed to be grilled sans (without) bread. She suggested cutting the cheese into slices about the thickness of my small finger (3/8″ – 1/2″) and browning it in a hot fry pan. Being that I am cheese adventurous I had to give this a try.

Guernsey Girl is made by the Upper Canada Cheese Company from cow’s milk, Guernsey cow milk to be exact. Out of the wrapper it had an appearance reminding me of Mozzarella – without the stringiness.

I took a bite of the cheese before grilling. It has a very interesting texture. It is squeaky on the teeth, like a fresh cheese curd. It was quite mild and somewhat unexciting. But this cheese is designed for heat.

I heated a frying pan and tossed a slice in. 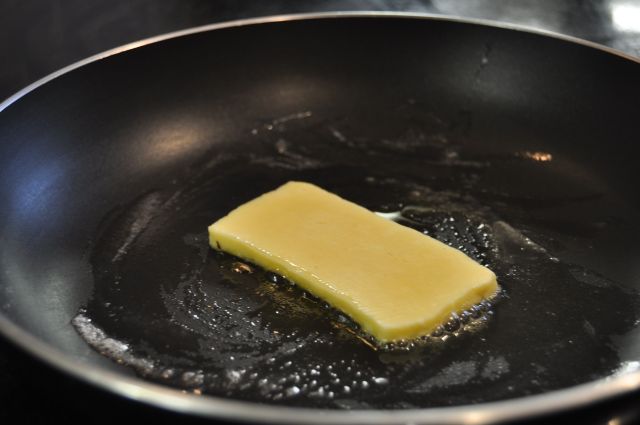 Guernsey Girl in a Fry Pan

Surprisingly it held it’s shape under the heat. I expected it to ooze all over the pan and burn because that’s exactly what happened when I tried frying a slice of processed cheese and a slice of cheddar cheese. The Gurnsey Girl looked like it would melt, but it didn’t. It started cracking and popping and sounding all exciting.

I lifted the corner. It was browning quickly so I flipped it over.

Doesn’t it look sexy here? The colour and texture had been transformed into a thing of beauty. When the second side was browned I removed it to a plate.

I might have slightly over cooked this piece but I was experimenting and grilling cheese without bread takes a little getting used to. But you get the idea.

What does Guernsey Girl cheese taste like? After browning this in a fry pan the outside was a little crispy with a softer inside. The inside was not as soft as I expected. I expected the inside to ooze out like a ripe Mont d’Or. But this cheese holds its shape. It is cheesy tasting but not cheddar tasting. Again it reminded me of mozzarella. The squeak dissapeared after being heated. Heating the cheese lifted the flavour a notch but this is not a knock your socks off full of flavour kind of cheese. It is subtle and slightly salty. A good snacking cheese once cooked.

I want to try this cheese on the barbecue to see how that works. I don’t think it will fall through the grill since it has so much body.

Subsequently I started thinking of all kinds of experiments I could try with the Guernsey Girl. Perhaps I should drizzle a little honey or maple syrup on top? Perhaps I could cut the cheese into sticks – like french fries or Jenga  blocks. 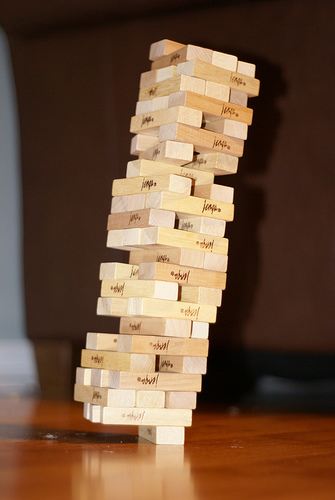 I could grill up a bunch of Guernsey Girl cheese sticks then stack ’em up high and eat ’em.

I’m glad I tried the Guernsey Girl grilling cheese. It was tasty, interesting and different. Those are all good qualities in any cheese adventure.