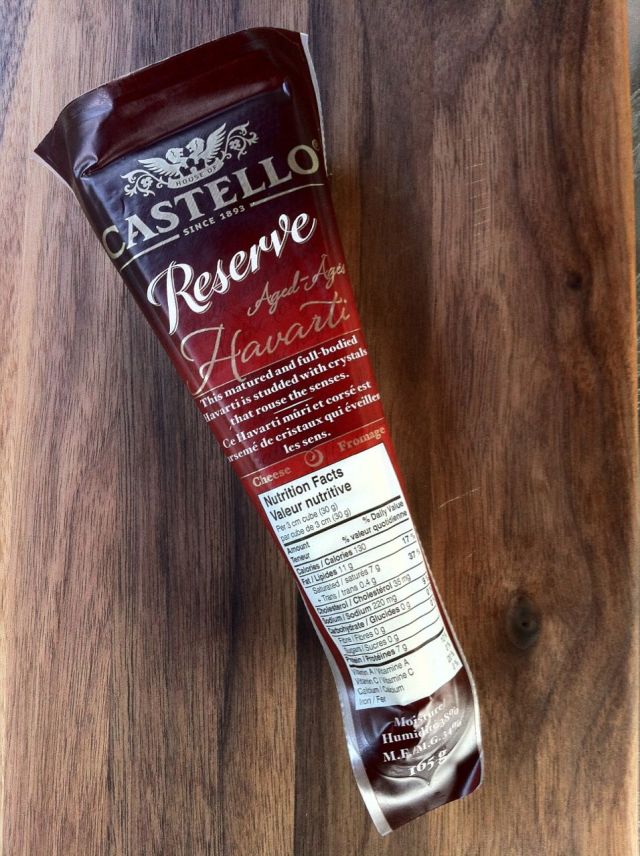 I found Castello Reserve Aged Havarti cheese at Starsky’s Market in Mississauga, Ontario, Canada. I always considered Havarti to be a sandwich cheese so I was intrigued by the fact that it was aged. The word “Reserve” usually means something special so I figured this was something I needed to experience.

The front label had the following description: “This matured and full bodied Havarti is studded with crystals that rouse the senses”. Say no more … who doesn’t want to have their senses aroused? I certainly do. 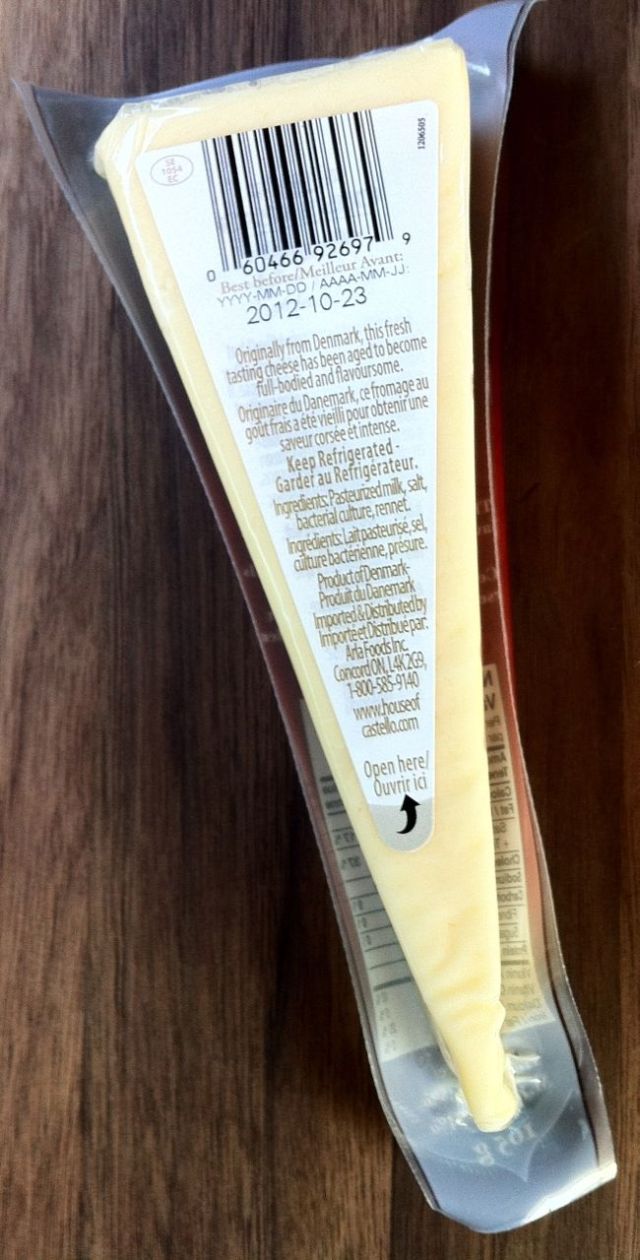 The back label says “Originally from Denmark, this fresh tasting cheese has been aged to become full-bodied and flavoursome.”  I am a little confused about the”fresh tasting vs. aged and full-bodied”. Those two terms mean opposite things to me and I was not quite sure what to expect.

At the bottom of the label is a tiny instruction “Open here”. I was thinking to myself that the wrapper would peel right open, like a Laughing Cow cheese pack. But not so. I pulled the tab only to reveal a second secret label. Very interesting. 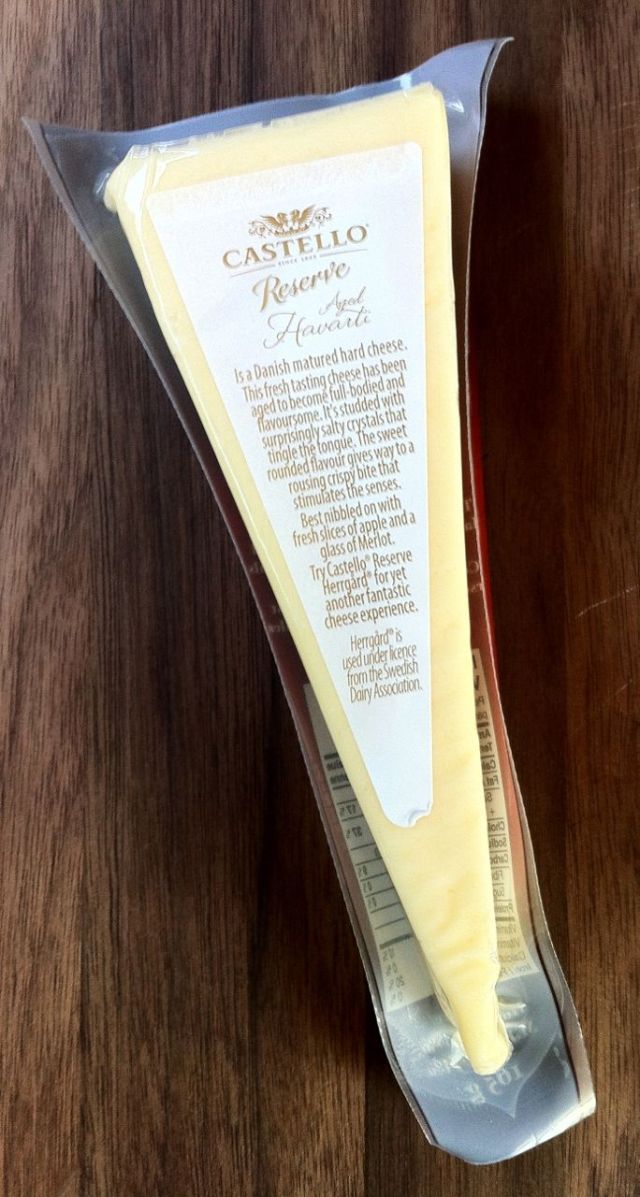 Printed on the secret label is the following: “Castello Reserve Aged Havarti is a Danish matured hard cheese. This fresh tasting cheese has been aged to become full-bodied and flavoursome. It’s studded with surprisingly salty crystals that tingle the tongue. The sweet rounded flavour gives way to a rousing crispy bite that stimulates the senses. Best nibbled on with fresh slices of apple and a glass of Merlot.”

I have to say, I still had not tried the cheese at this point but I was excited and my expectations were set to very high.

Castello Reserve Aged Havarti is not a Canadian cheese. It is made in Denmark and imported into Canada by Arla Foods Inc, Concord, Ontario. The Castello USA website pronounces this cheese as the “World’s First Aged Havarti”. 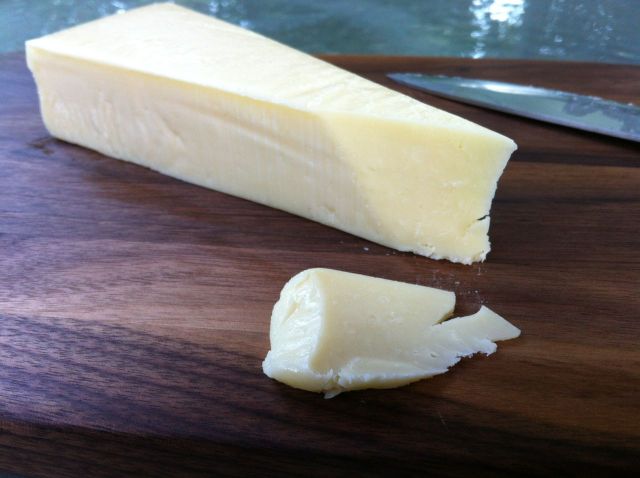 So what does Castello Reserve Aged Havarti taste like?

The texture; although the label says that this Havarti is a hard cheese, I found it to be pretty soft at room temperature.  This is not a spreadable cheese. But is also no where nearly as hard as aged Gouda or Parmesan. It’s pretty easy to squish between your fingers.

The crystals; I really was looking forward to my tongue being aroused by exciting crystals. Disappointingly, I had one heck of a time getting any crunch or tiny salt surprise. The piece of cheese I purchased was basically void of the protein crystals.

The flavor; Even though it is aged, this is a mild cheese. Set aside all the package hype about aging and arousing crystals and you are left with a mild, tasty cheese.

Fresh vs. Aged; I thought it tasted more fresh, than aged. Havarti is normally aged three months. The Reserve is aged nine months.

So how did I like this cheese?  It is a tasty, mild and soft textured cheese. It would be good on a sandwich. I would not use this as a stand alone cheese. In fact, after few bites I decided to enjoy the rest on a Daelia’s Pumpkin Seed and Rye Biscuit. That was a good paring. That biscuit had flavour and I felt that the cheese needed something to enhance it. 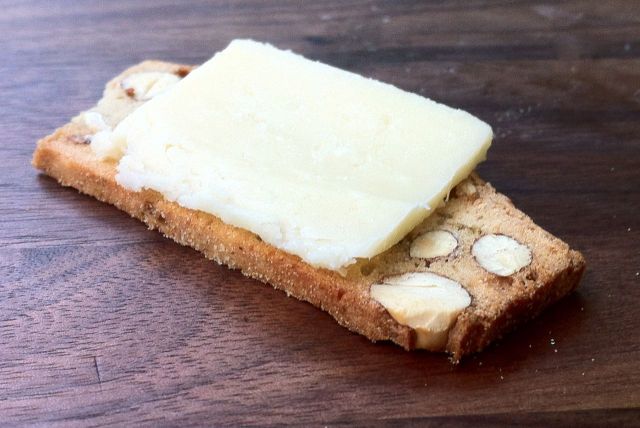 Admittedly, I did not try this with the apple and Merlot as suggested by the folks at Castello.

The conclusion: A mild cheese, satisfying but not exciting, best enjoyed when paired with something flavourful.